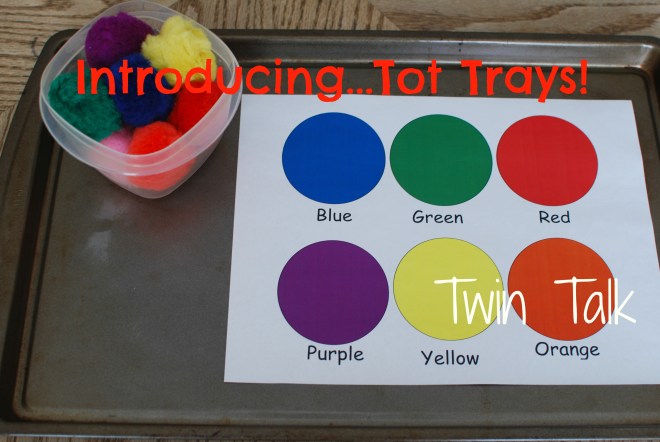 Lately, I’ve been on a wild ride. One that I’ve created. See, when I get excited about something new – I focus on that one thing exclusively for weeks with giddy anticipation for the creation of whatever I’m doing. It started last summer, with DIY sensory boards and a spaghetti sensory bin because – I was on maternity leave, and why not, it would be cute to watch. Then it took off from there. I found myself reading about sensory bins, learning towers, and skills that teach toddlers independence. B, throughout his tantrums, took a liking to all of those things and I realized, we have the need in my house. The same old toys and free play all day won’t work for them, especially B. He needs stimulation, he needs a variety of experiences, and he needs to do things on his own. I found myself drawn to toys that let the twins explore on their own and figure out concepts independently, like our treasure baskets and sensory bottles, rather than those toys that did all that for them.

Then my blog took a turn, focusing on activities and crafts, because that’s my life at home right now – that’s what the twins do. I don’t know what direction this blog will go in the future but it’s my hobby and I enjoy it. And whatever the twins are interested in, I’m interested in. I made buckle pillows and zipper boards (posts coming soon!). I got a sewing machine for Christmas. I got so pumped about all these little things I couldn’t sleep at night. I even got my husband into it, as he’s still making those learning towers (they won’t be done until spring, unfortunately!). And then, I stumbled upon the Montessori Method. I’m not the kind of person who throws all the eggs into one basket – there are many correct ways to do things. HOWEVER. I knew nothing about Montessori, except that it was an expensive preschool. I still don’t know much about it, so this post isn’t about that. But what I have found is that everything B needs, everything that my husband and I believe in (independence at a young age, discovery, problem-solving, etc)….matches the Montessori method, almost to a T. We had no idea. As I read more about it, I’m really in agreement with so many of the Montessori concepts. My twins are only 19 months; they aren’t going to preschool for quite a while. So I wanted to implement something at home that resembled “preschool learning” because the twins love to learn new things.

Since I’m focusing mainly on cheap, simple toys (which typically do fit within a Montessori-type activity), I hosted a Busy Bag Exchange back in December (another future post). The bags were great but I wanted more.

So just recently, through a Montessori lens, I discovered tot trays. And fell madly in love with them. As far as I can tell, “Tot Trays” were coined by Carisa at 1+1+1=1. Her website is loaded with ideas – more than I could ever search through in one night. But the idea is quite simple, and very much like a busy bag. Basically, the child does an activity; a simple, cheap, educational activity on a tray. I just bought trays but when I tried tot trays for the first time, I didn’t have them and used a cookie sheet instead. The activities are not meant to last hours and hours (though bonus points if they do!) – they are short activities that reinforce skills – everything from math or language arts skills to practical life skills (like practicing pouring water into a cup, or picking up things with tongs, or scooping with spoons). It can be anything really, so long as it fits on a tray. It’s not complicated and it doesn’t need to be over-thought. Many people do tot tray activities without knowing they have a name. The idea with the tray is that the child will be responsible for it. As soon as they are able, they will carry the tray with the activity on it over to the floor or a table and return it when the activity is over. From a practical standpoint, trays have raised edges, and raised edges keep messes from going everywhere! I just adore them.

A few weeks ago when it was (shocker) snowing again, we needed something different and quick after nap. I decided to implement our first two tot trays, back to back. First, we started with a color matching tot tray. I printed out the color sorting mat from here, grabbed an old cookie sheet and the large sized pompoms I already had. After realizing I only had one cookie sheet, I ended up giving the babies their coloring mats on the table with a container of pompoms for each of them. Their only job was to take the pompoms and match them to the corresponding colors on the mat. 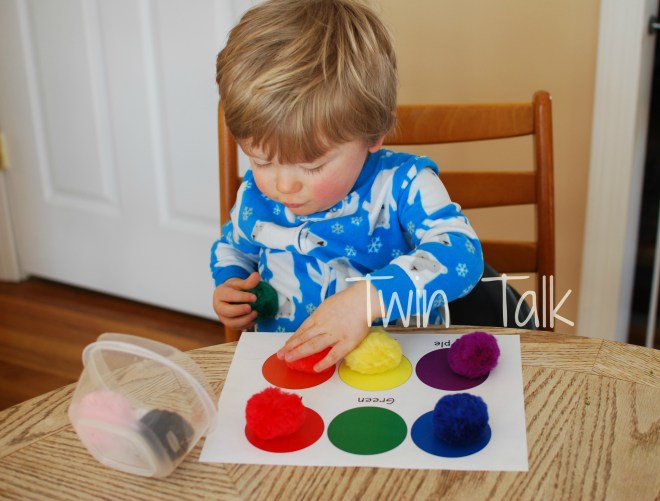 They did it in about two seconds. I don’t know if that’s good or bad! That’s the thing with tot trays – I mean, I obviously started them with one that was not a challenge for them, which made the activity short. I would imagine the goal is to challenge them at least a little bit. I love the many skills being applied here – knowing the colors, but also identifying letters, feeling textures, and the fine motor skills necessary to place pompoms on a small circle. B was especially into this tot tray, and kept trying to get the pompoms to stick to the paper. (I added pink, white and black pompoms at first because I knew they knew those colors – but when your mat doesn’t have those colors on it? Yeah – don’t do that. Lesson learned!) B practiced saying the colors a few times. 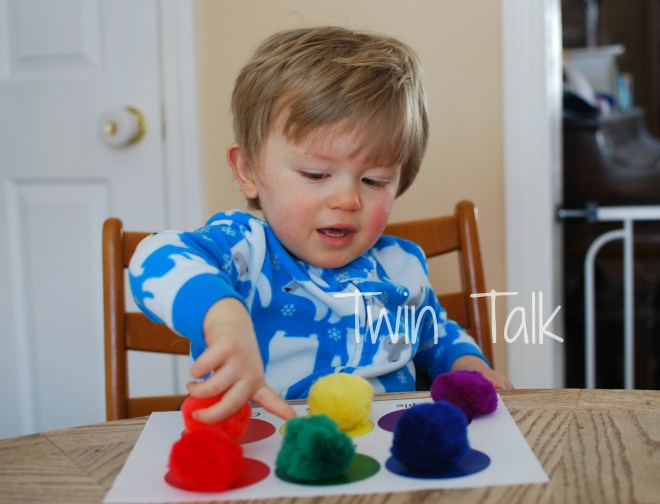 And that was it for our first tot tray! Luckily, I had one more planned. I grabbed two sheets of plain paper and as this was around Valentine’s Day, I drew a big heart on each paper. Then, on the “tray”, I gave the babies a sheet of heart stickers and two Dollar Tree crayons. So simple and so cheap! My kind of activity!

I tried to get the twins to put the stickers “inside the heart”. That didn’t work out exactly, but that’s okay. C was especially into this tray. She is madly in love with stickers right now – they both are. I had to peel them off for her but she stuck every one down and then went to town with the coloring. 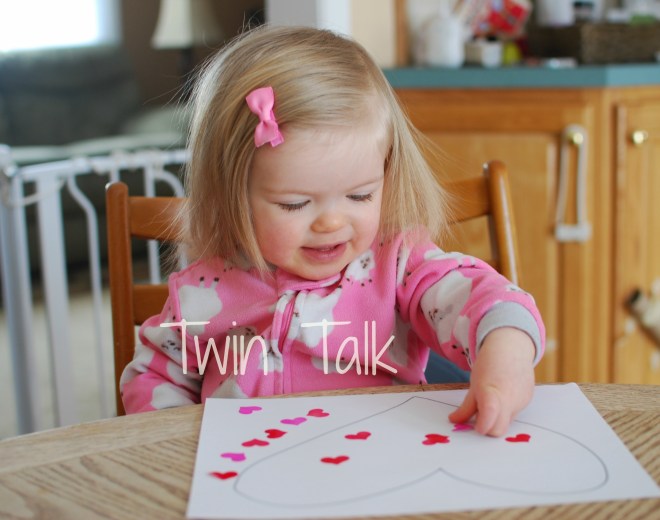 She couldn’t stop smiling through the multiple sheets of stickers she went through! She really had to work her fine motor skills around pulling stickers off my fingers and then sticking them onto paper. 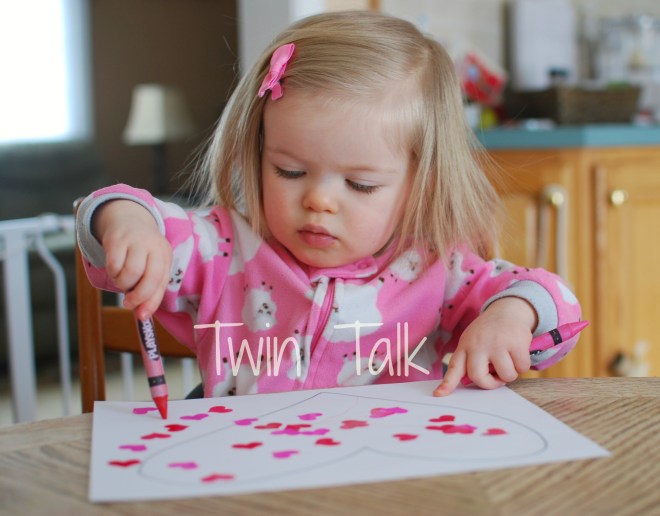 This tot tray lasted much longer than the first one, which was nice. When they were done, we hung them up on the slider with our other heart crafts. My first introduction to tot trays was a success. I’m not sure how I’m going to post about them and organize them here on this blog, but I plan to do many more tot trays with them in the future. Next up – learning to carry a tray!

On a side note, I won’t have a blog post about this one but my nanny made amazingly adorable weather sensory bottles. 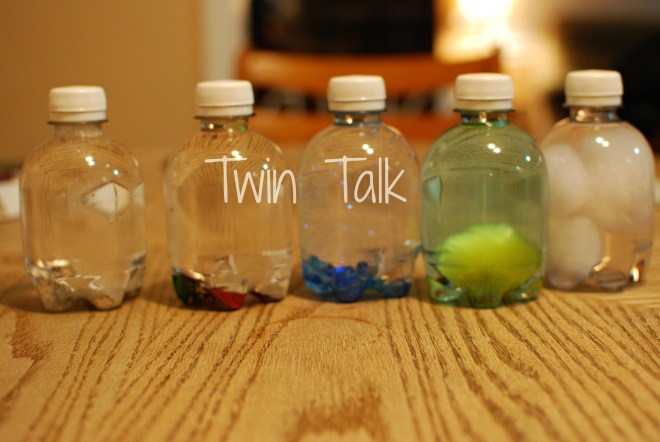 This picture is not my best work, but the bottles demonstrate “snowy”, “windy”, “rainy”, “sunny”, and “cloudy”. I’ve just set up a Facebook page and there you can find the link where my nanny found the idea!

2 thoughts on “What are tot trays?”