Yesterday during our “blizzard”, we did our first dry sensory bin. It was my favorite of all of those we’ve tried so far (well, out of water, snow, and potato flakes) and it almost didn’t happen in the first place.

B took a bad nap – only 50 minutes. I could tell he was still tired because he woke up crying. I let him cry for a few minutes because I wanted to see if he’d drop back down in his crib and go back to sleep. Instead, I realized if I let him keep going he would wake up C who was a room away, so I had to go in there. And by that time, he was wide awake. Once downstairs, he was super fussy. Didn’t want to do anything at all, including watch TV. He was just cranky and miserable. And then C woke up 20 minutes later. Good times – easily my biggest pet peeve, a bad nap! My original plan for the afternoon was maybe doing a repeat snow bin or going upstairs to play in the playroom. But B was in the mood to get his hands on everything and anything he shouldn’t have. So I needed another plan.

I remembered I had a bag of kidney beans from the Dollar Store (my favorite place for sensory bin items!) that I originally planned to make into a new shaker. Instead, I made a snap decision to dump it into the bucket that holds the sensory bin tools, as I didn’t have enough beans to use my shoe storage container. With B on my hip and C trailing us around, I found a bag of chickpeas in our pantry and dumped that in the bin too. With towels quickly thrown on the floor and the tools out, I let the twins have at it.

They absolutely loved it. In fact, for the first 15 minutes, they played in absolutely silence. Not a sound was uttered because they were that engrossed. 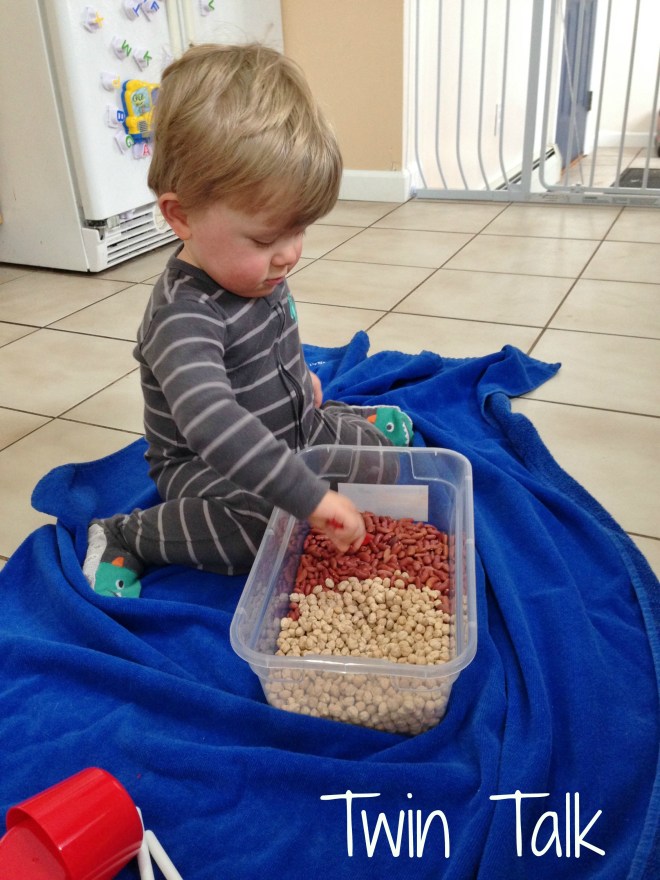 I started with the beans separated, knowing full well they’d be mixed up in seconds, which was the point of course. 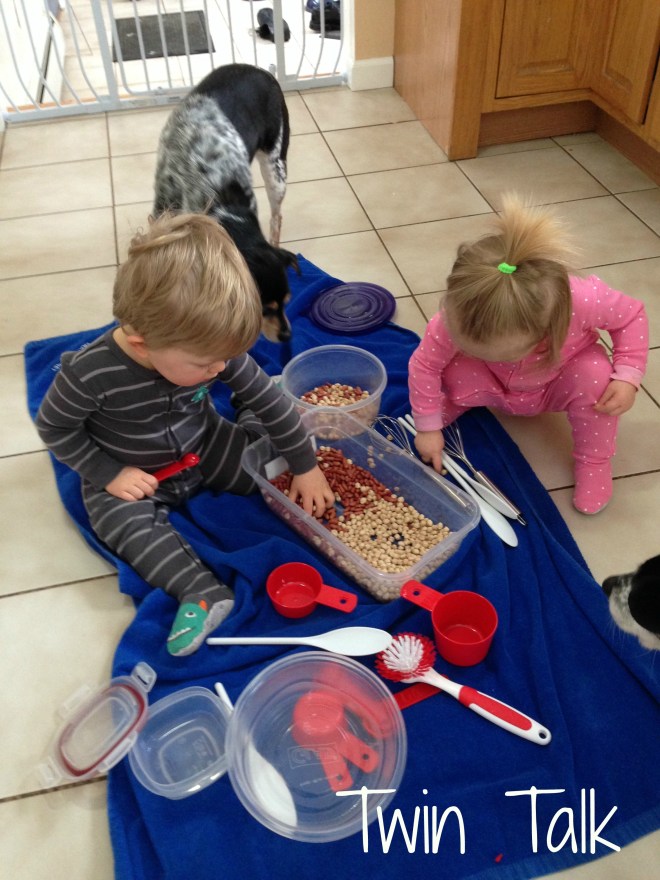 B and C used the same tools they always use for these bins. I put them aside for this purpose. The dogs were very curious and managed to crunch a few dried beans on the side, but snouts did not make their way into the bucket. 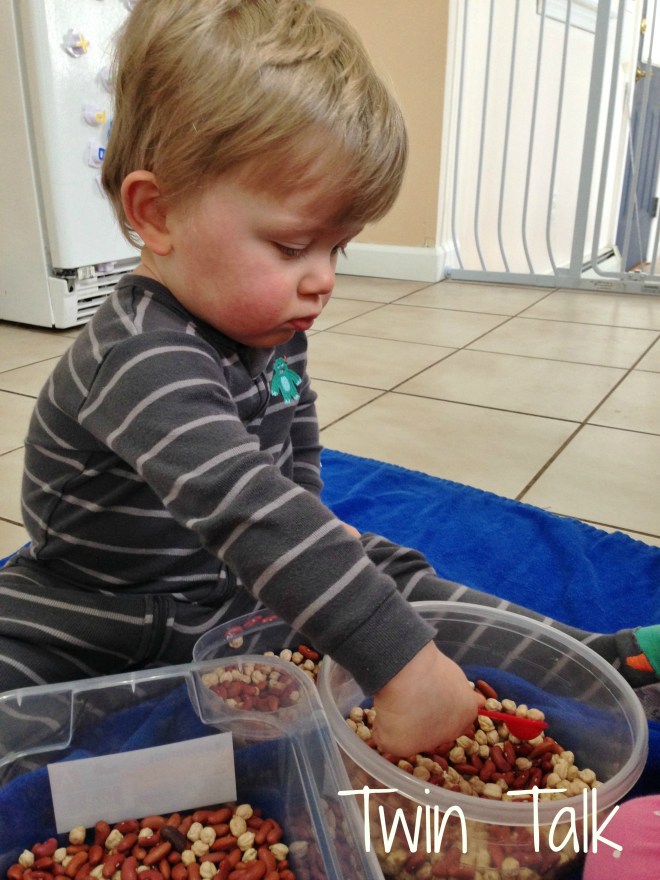 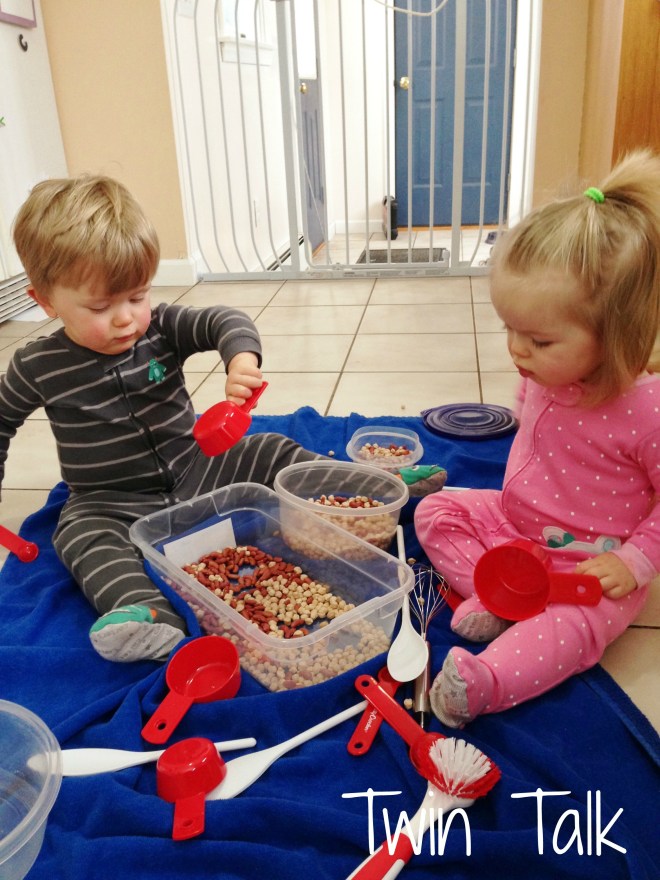 There was a LOT of transferring beans back and forth between containers and spoons. I’d say that’s how they played with this bin almost the entire time. The beans made fun noises when they came in contact with various sized containers. The twins explored the beans up close and individually as well: 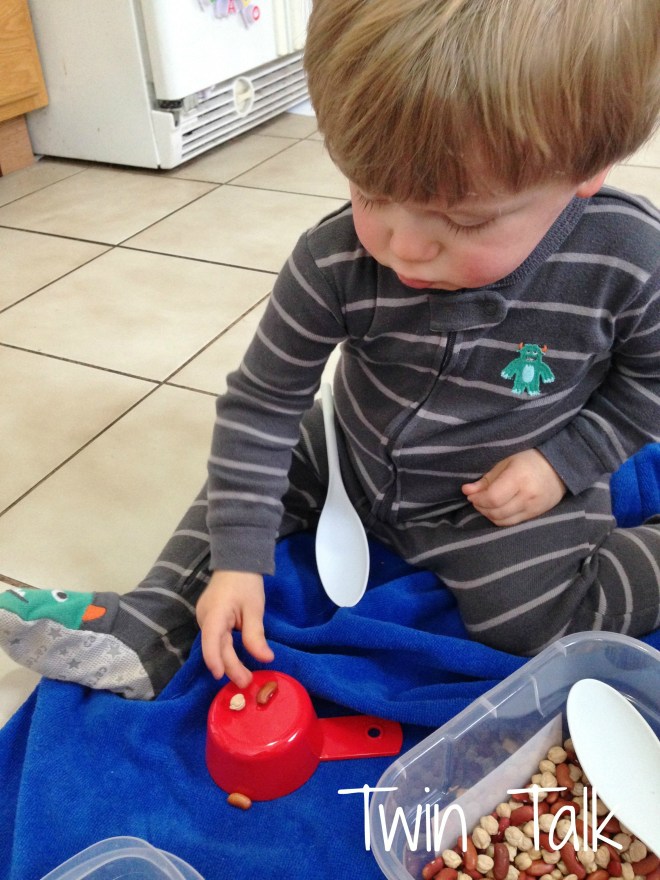 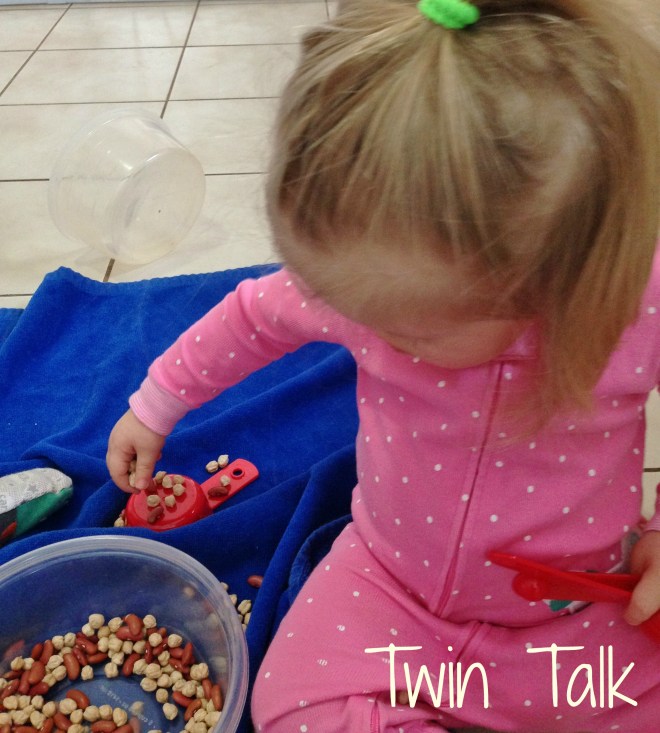 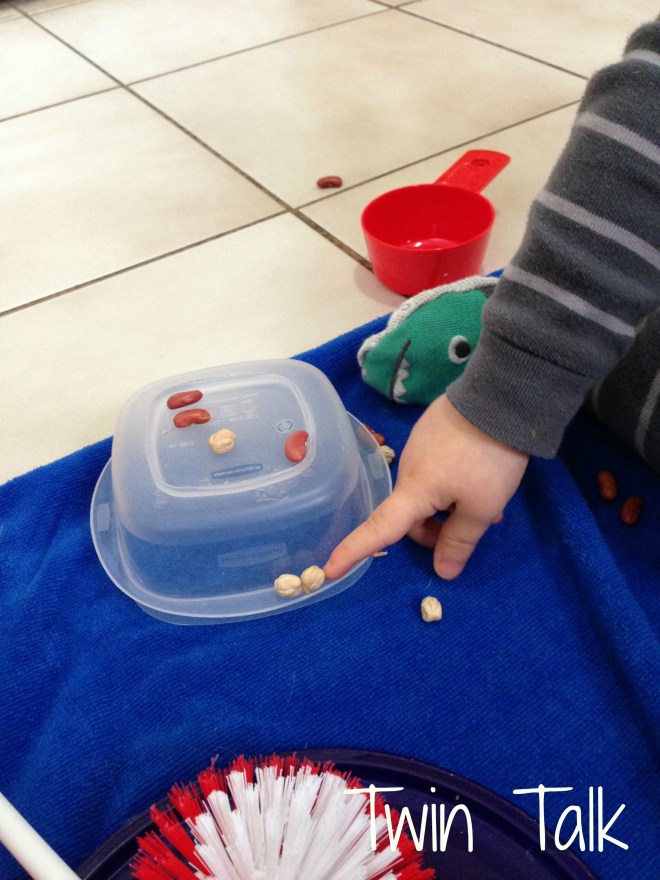 Obviously when doing activities with kids, safety is #1. These beans would definitely not be something I would use if my twins were still putting everything in their mouths. At this point, if they p

ut something in their mouth, it’s because they want to eat it like snack. And luckily for me I suppose, they didn’t realize that the beans were food. They saw them only as toys. At one point, B held a bean to his mouth and looked at me, waiting for me to give him the go-ahead or take it away. I didn’t do either – I just redirected and asked him for help scooping beans. That was the only time for him and C never tried it. They couldn’t get enough of this bin  – and it lasted a whopping hour and a half. It was awesome. They were both completely caught up in it for the longest time.

I have been rating these activities for their mess factor, but would also like to start adding in ratings for cost and ease of set up. For this activity, the set-up rating from a 1-10: 1. I dumped beans into a bucket, threw down a towel and grabbed some tools. It took 2 minutes to set up! The cost rating from a 1-10 (1 being cheap, 10 being expensive): 1. I spent a dollar on the kidney beans and had everything else in my house already. And finally, the mess factor out of 10: 3. Here was the mess: 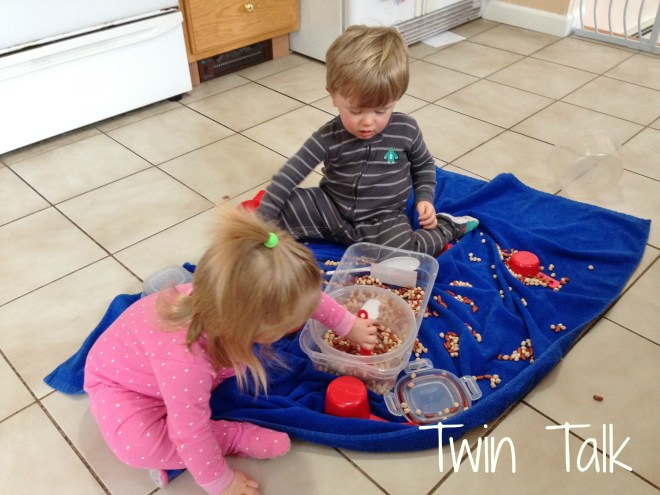 Beans did travel. I sat there with them for most of the time and kept putting beans back onto the towel. I’d also ask them to help me put them “on the blue towel”. Since they are learning their colors, they were happy to follow these directions. A few times C did purposely drop some beans on the floor, but as long as they weren’t going far I didn’t care. The clean up would have been easy anyway – just a broom! But by keeping the beans on the towel I was able to bag them and save them for another time. The only thing I would’ve done differently is tape down the towel or tape down our vinyl tablecloth had I used that. The towel kept slipping under them and beans traveled more that way.

This bin was my favorite so far and will be my go-to activity when the twins are antsy. It seems like they enjoyed it more than the wet bins as well, which was fine with me!