I’m straying from my usual “quick and easy” theme to describe the process I went through to make a buckle pillow. Actually, three. 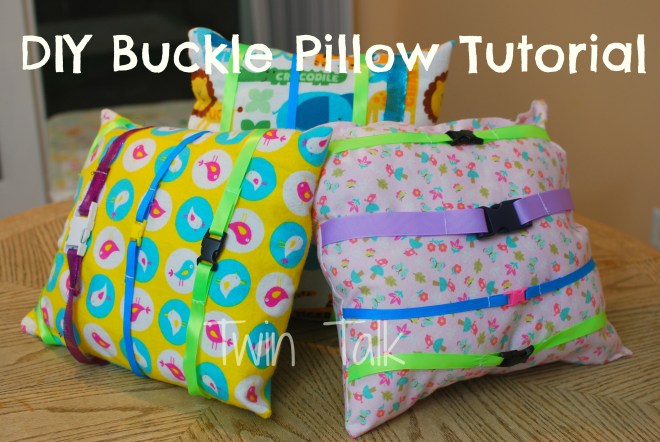 This project was a big one for me. A few months ago, in December, I saw the need for some sort of toy with buckles on it. C was taking an interest to buckles, as most toddlers do, but of course at 16 months, she couldn’t open or close the buckles herself. I knew she’d figure it out soon, though, and I went online to see what I could buy for her with buckles on it. There are a few products out there, but the most common toy is this one. With shipping, it runs around $25. As is my style lately, I’m too cheap to pay for that and wondered if I could make it. There wasn’t much out there for DIY buckle pillows for toddlers, but I did find one from This Girl’s Canon and I modeled my pillows after hers. To cut to the moral of the story – each pillow I made cost just shy of $11. To me, that drop in price from $25 was well worth my time, and my favorite aspect of it was that I got to choose the colors and patterns, making it just a little easier on the eyes.

I have to preface this tutorial by saying that before this project I had never used a sewing machine and for the most part, never even hand sewed either. When the babies were first born I had this idea to sew together felt letters of the babies’ names and I started that project, but because I was hand sewing it, I quit. Then, for Christmas I received a sewing machine and knew if I wanted to create toys for the twins, I’d need to sew. I’m still learning how to thread the thing, but yeah, using a sewing machine is much faster and easier than hand sewing. Being my first time, I think I jammed the machine every 5 minutes. Clearly I don’t really know how to sew.  Regardless, this pillow is a sewing machine project. It was not quick (not counting shopping for fabric, each pillow took me about 3 hours). It was not easy either, though for an expert sewer I think it would be. I made two of the pillows around Christmas, but that was before I decided to start blogging about toddler activities and crafts, so I didn’t take pictures of the process. But last week, I made my third one and chronicled it throughout each step. This post is pretty picture heavy.

Here’s the step-by-step on how I made a buckle pillow (picture comes before directions): 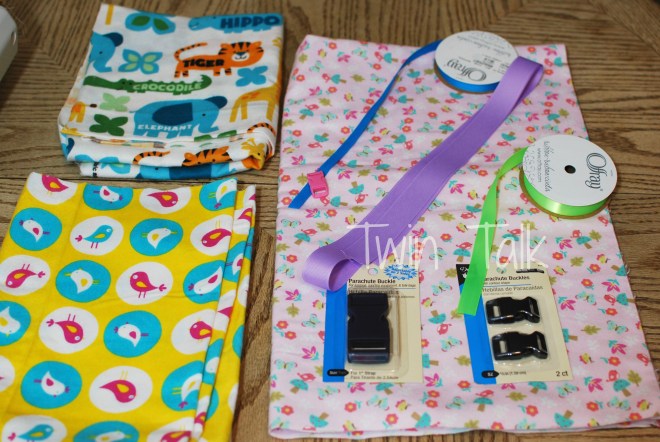 1) Gather your materials – fabric, buckles, and ribbon. Last week, I made the pink pillow. I got that fabric from Joann’s – it was 60% off. I paid less than $3 for a yard. I used less than 1/2 a yard for this project, so really, what I needed for the pillow cost about $1.50. For the buckles – each pillow took four parachute buckles – one large one, two medium sized, and one small. Here’s the page that shows prices for the large and medium buckles (from Joann’s). Here’s the page to the small buckles (from Oriental Trading, but I saw them today at Walmart!). Together, the buckles cost me about $6.50. As for the ribbons – I walked around Joann’s with the buckles in my hand and chose ribbons that closely fit the width of the buckles. The ribbons together cost around $2.75. 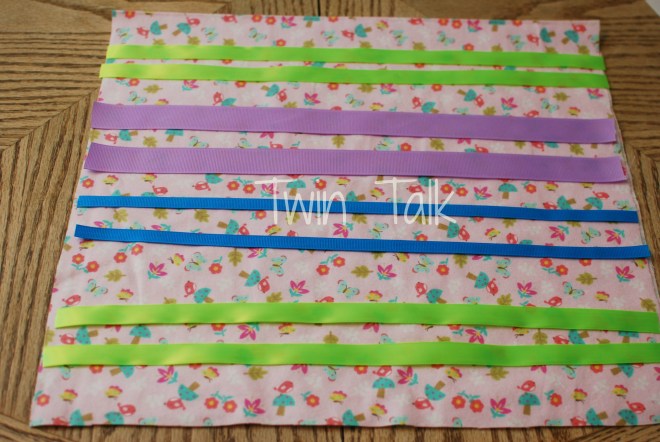 2) Fold fabric in half, then cut a piece that is 15 1/2 X 13 1/2, from the top. That way you will only have to sew three sides instead of four. Then, cut ribbon the width of the fabric. You need 2 ribbons for each buckle. 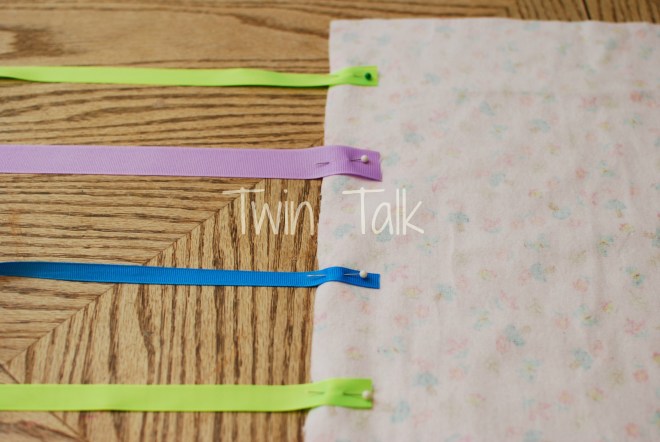 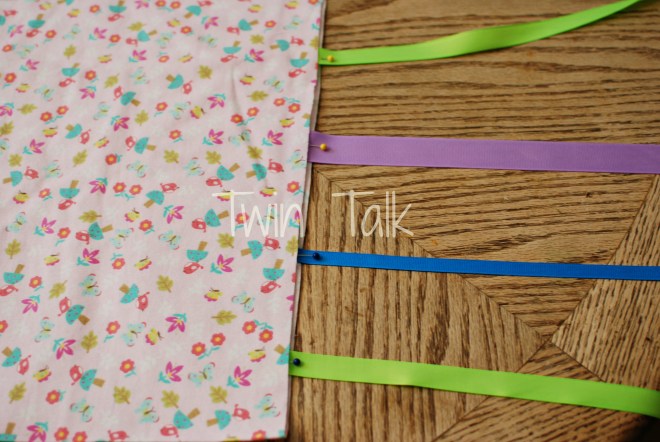 3) Open the fabric and flip it over. Then, pin the ribbons 2.5-3 inches apart on one half of the fabric, so when you fold the other half back over the ribbons will be sticking out the sides. 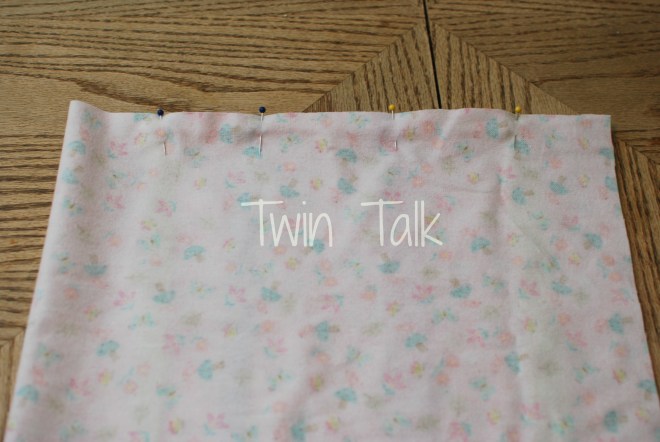 4) Turn the ribbon inside out again. Tuck the ribbons inside where they would fall naturally, rather than letting them stick out. Repin them with both layers of fabric. 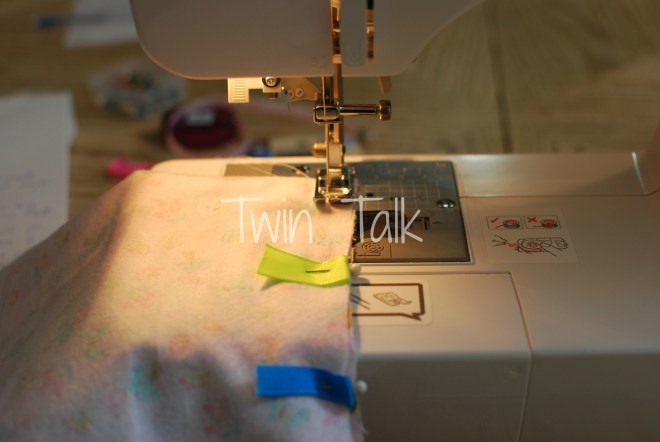 5) This isn’t a Sewing 101 post, so I’ll skip the how-to’s on sewing. I learned many things, like take the pin out before you run over it with a needle. Anyway, sew the two sides that you just pinned. Then turn it inside out again, and it should look like the picture below. 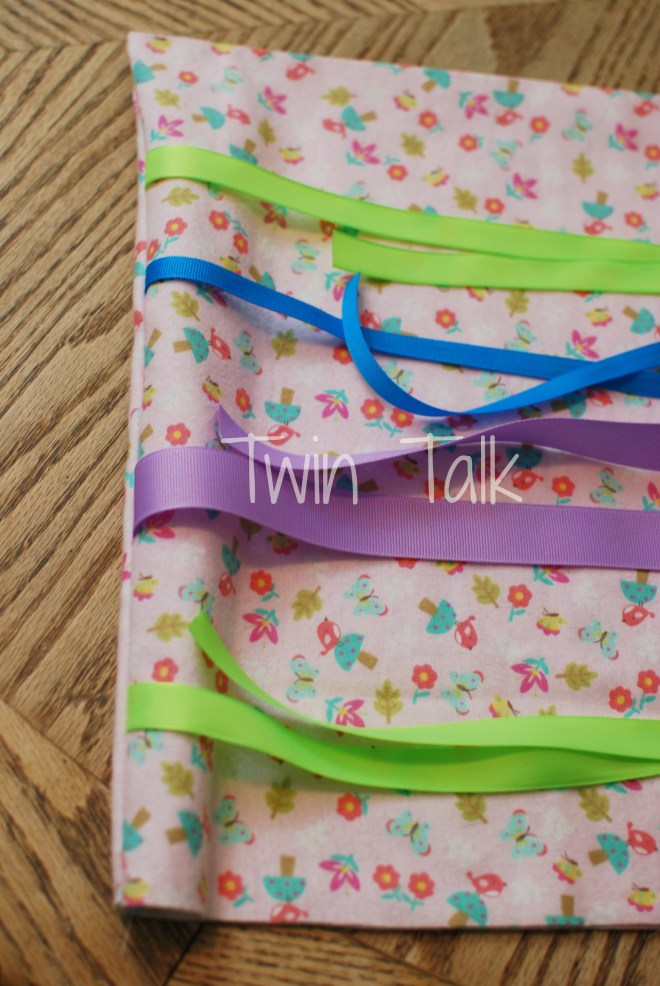 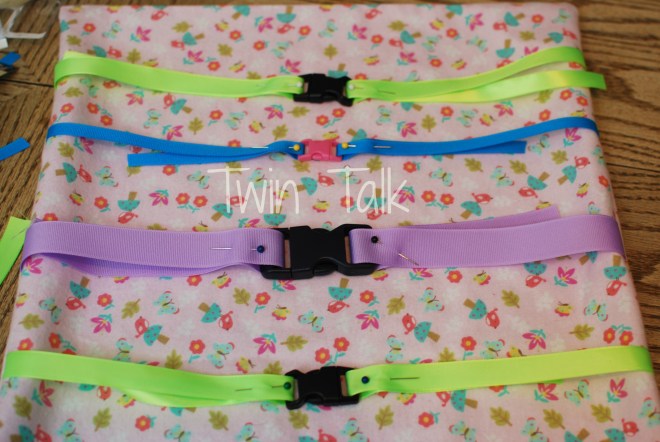 6) Pin your buckles to the straps. I made an error here – I pinned one of the green ribbons too loosely, so that when the pillow was all done the ribbon didn’t sit nicely on the pillow; it fell down. I had to take out the stitches and redo it. So make sure to tighten the straps enough  – though not too much, as you’re going to stuff the pillow later. 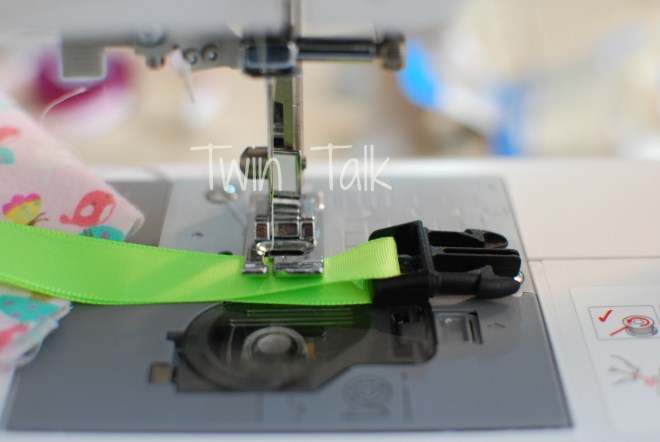 7) Sew the straps to the buckle. It should then look like the picture below. You can trim some of the excess ribbon as well, which I did after I was all done with the pillow. 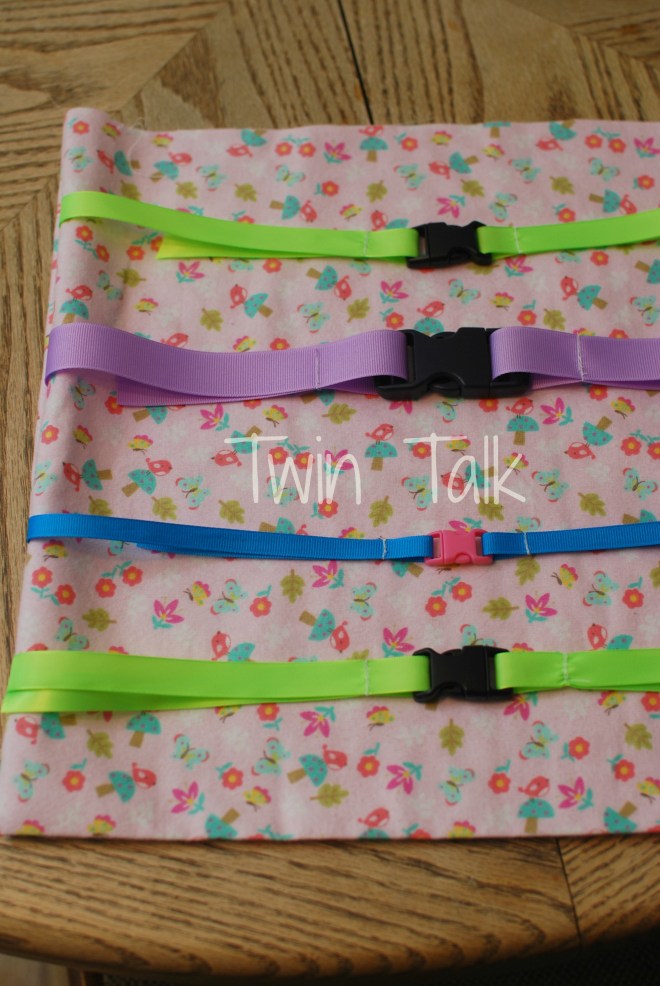 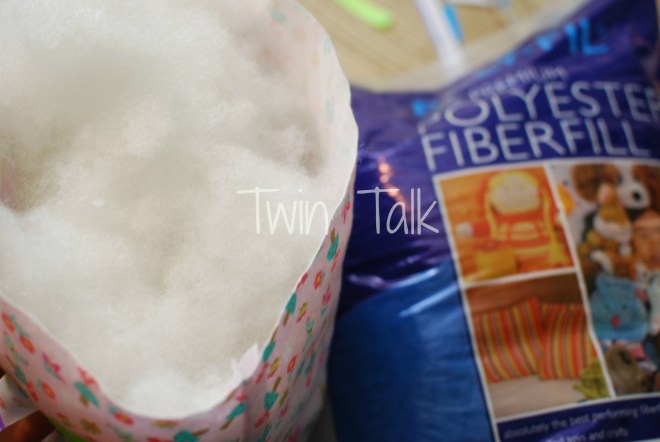 8) Stuff your pillow. I bought that polyester fiberfill from Walmart back when I was going to make the felt letters (which maybe I should just finish…). It’s a huge bag. I understuffed this pillow. Again, it’s kind of a fine line. Stuff it enough so that the ribbons lay nicely on top of it but not too much where there’s no room for it to smush, as a pillow should do. Tuck the stuffing into each corner as well.

9) This is the last step, and I didn’t even take a picture of it because it’s a little challenging to do. Sew the last side up tightly without letting the stuffing come out. When you’re done, the pillow will look something like this: 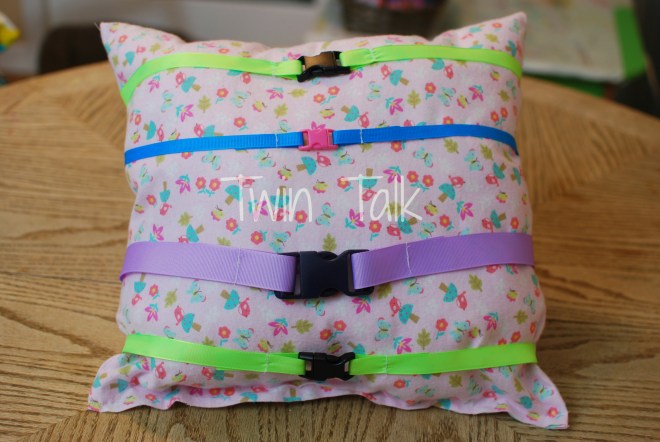 Yay! It was fun for me – I chose how it would look, I didn’t spend much money on it, and it’s just very satisfying to see your kids enjoy something you created for them. I had been taking pictures for the last few months of the twins playing with the first two pillows I made, and this toy still hasn’t gotten old for them. 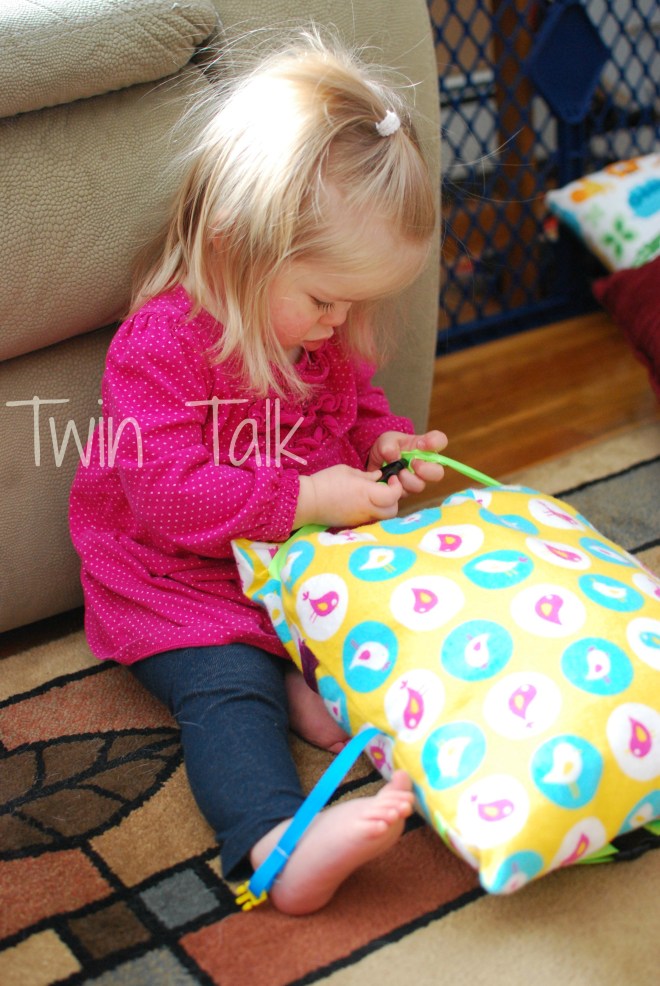 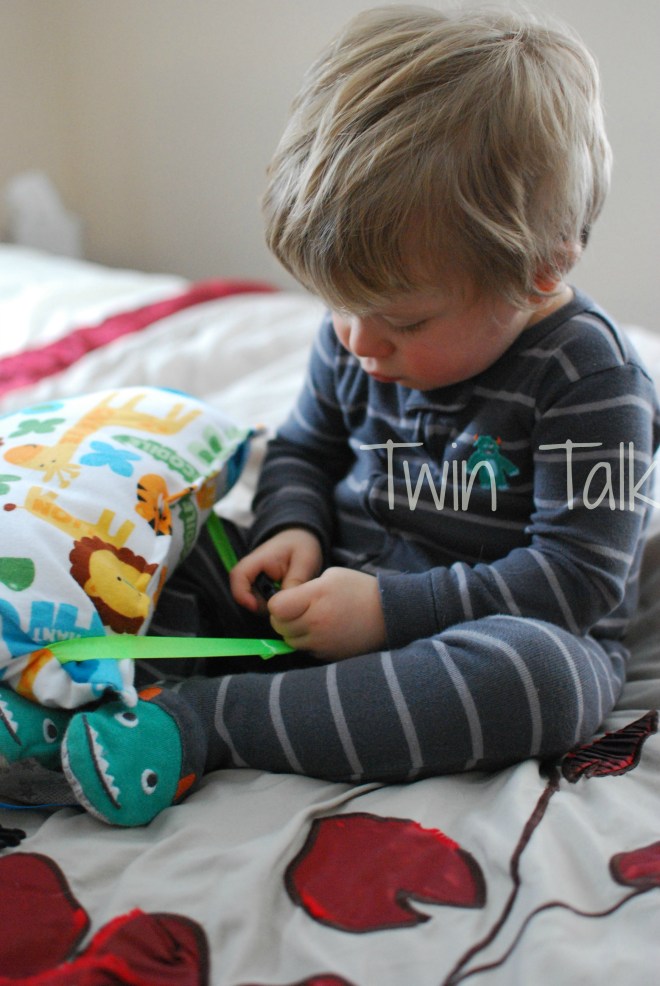 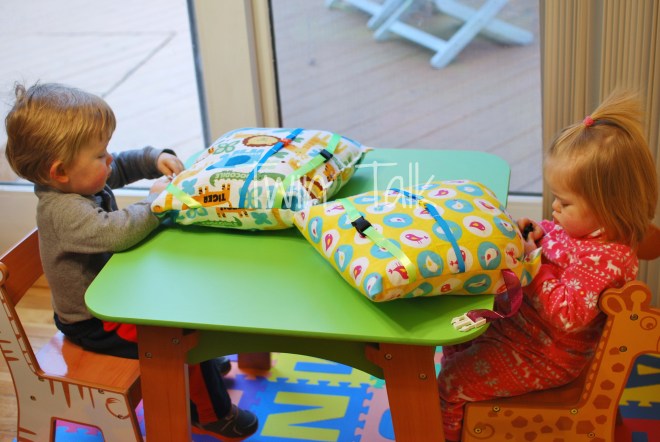 Of course, both toddlers have now mastered buckling (though they still can’t open them), and have moved on to their booster seat buckles, the car seat buckles, and even the poor dogs’ collars’ buckles. They love these pillows! I’m going to get back to quick and easy activities because I don’t have this kind of time often, but once in a while, it’s worth it.